Abortion is essential health care and a constitutionally protected right. Yet, over the last decade, anti-abortion lawmakers have passed hundreds of state laws designed to restrict and ban access to abortion. Such measures disproportionately harm people that already face discriminatory obstacles to accessing health care.

One such law—Mississippi’s 15-week abortion ban—will come before the U.S. Supreme Court on December 1 in Dobbs v. Jackson Women’s Health Organization. The case—being argued by the Center for Reproductive Rights—is the most consequential abortion rights case in generations.

This consequential Supreme Court case will be argued on Wednesday, December 1. Listen to oral arguments at 10 a.m.

In the case, the state of Mississippi has explicitly asked the Supreme Court to overturn Roe v. Wade—the Court’s 1973 decision recognizing the constitutional right to abortion—and rule that abortion is not protected by the U.S. Constitution.

Abortion bans, like Mississippi’s, are deeply harmful and perpetuate an unjust system in the U.S. where people who already experience discrimination and disparate health outcomes—especially Black, Indigenous, and other people of color, members of the LGBTQ community, people with disabilities, young people, and people living on low incomes—are prevented from accessing essential health care services.

The harmful and disproportionate impacts of abortion bans are laid out in numerous amicus briefs, also known as “friend of the court” briefs, filed in support of the Center’s case challenging the Mississippi ban.

Highlights of the amicus briefs and their arguments: 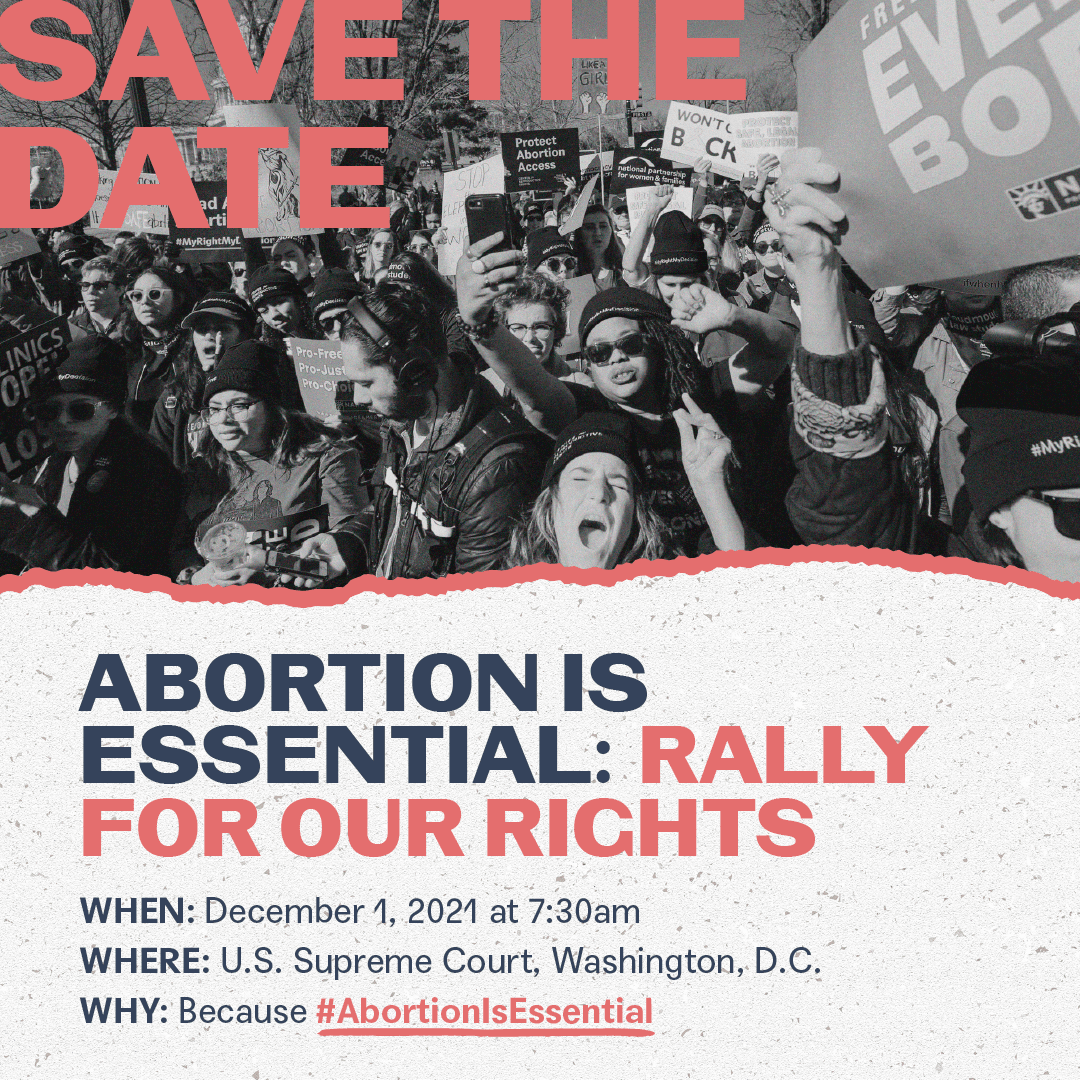 Abortion Is Essential: Rally for Our Rights – December 1 link

Abortion Is Essential: Rally for Our Rights – December 1

“This brief focuses on Black and Brown people, as well as disabled, low-income, Indigenous, and LGBTQ+ people living in Mississippi and Louisiana,” the advocates write in the brief. “Members of these communities already have difficulty accessing reproductive care because of racial and socioeconomic structural barriers. The reproductive autonomy of Black and Brown people, for instance, is intensely intertwined with, and limited by, the socioeconomic consequences of racial oppression.”

These barriers create deep inequalities in health care access and outcomes. The brief explains, “Marginalized people in Mississippi…lack access to healthcare services and comprehensive sexual education, and often have poorer health outcomes—realities that make access to reproductive care for these communities all the more essential, while perversely placing such care out of their reach.”

Amici also put Mississippi’s 15-week abortion ban in a historical context, explaining how it is firmly rooted in “long and ugly traditions of denying people of color their reproductive autonomy.” In contrast, “abortion’s central promise is autonomy—the ability to control one’s own body and destiny.”  Read the brief by Reproductive Justice Organizations.

The National Birth Equity Collaborative and other organizations and individuals working to improve maternal health outcomes describe how the U.S. already faces a maternal health crisis that disproportionately affects Black women, and why it would be made worse if Mississippi’s ban were to take effect.

Black women “are more likely to experience adverse maternal health outcomes than any other group, both in Mississippi and in the United States more generally. These disparate outcomes reflect a lengthy history of state-sanctioned, racially-motivated policies and practices,” write amici.

In the U.S., “Black women were nearly two and a half times more likely to die from childbirth than were white women” and “the pregnancy-related mortality ratio in Mississippi was three times higher for Black women than for white women.”

Amici explain that the Mississippi abortion ban will exacerbate this maternal health crisis by forcing “pregnant persons who wish to terminate their pregnancies after 15 weeks’ gestation to instead carry those pregnancies to term, thus incurring significantly greater maternal health risks, including nearly doubling their risk of death.”

Amici from birth equity organizations emphasize the need to ensure access to the full range of reproductive choices, including abortion, to promote maternal health. “Advancing maternal health requires that pregnant persons have the autonomy to make reproductive health decisions for themselves and their families,” write amici. “It is particularly important that Black women have that autonomy in light of the continuing impact of racist policies and practices on their health, and the correspondingly greater health risks they face from pregnancy and childbirth.”  Read the brief by Birth Equity Organizations.

In this brief, numerous Native American communities explain how Mississippi’s abortion ban would exacerbate the harms already imposed on their communities as a result of the federal government’s failure to fulfill its obligation to provide reproductive health care to Native people.

The signers include Cecilia Fire Thunder, National Indigenous Women’s Resource Center, Native American Community Board, and over 30 other organizations and 225 individuals committed to ensuring that Native people in the United States and Territories have access to comprehensive reproductive health services.

“As a result of a targeted control over Native reproduction, coupled with woefully underfunded health care, Native women experience disproportionately poor health outcomes, including high rates of maternal and infant mortality and morbidity,” the amici write. “The lack of access to comprehensive women’s health care is life-threatening to Native women, trauma-and poverty-inducing for families and communities, and costly for economies and health systems.”

The brief argues that upholding the Mississippi ban would open another dark chapter of depriving Native people the right and dignity to decide if, when, and how to have a family. The brief explains, “Abortion restrictions further compound socioeconomic stressors contributing to poor financial stability. For Native women, this means exacerbating longstanding disparities and jeopardizing the health of future generations.”

The representatives of Native American communities also highlight that preventing, instead of providing, access to meaningful reproductive health care and abortion is a human rights violation and a violation of the government’s trust responsibility.  Read the brief by Native American Communities.

Organizations and advocates dedicated to protecting the rights of lesbian, gay, bisexual, transgender, and queer (LGBTQ) people explain how a court decision gutting the constitutional right to abortion would cause grave harm to members of the LGBTQ community. Amici include the National Center for Lesbian Rights, National Center for Transgender Equality, the National LGBTQ+ Bar Association, the Human Rights Campaign, and other LGBTQ advocacy organizations.

Specifically, because members of the LGBTQ community already face significant barriers to accessing reproductive health care, being denied an abortion, “exposes an already at-risk population to greater rates of poverty, domestic violence, and negative health outcomes.” As amici explain, members of the LGBTQ community “are more likely to lack insurance. And they face widespread discrimination in the health care system, including in the provision of contraceptive care. All of these factors combine to make sexual minority women among the most vulnerable who rely on abortion rights.”  Read the brief by LGBTQ Organizations.

The brief of the Autistic Self Advocacy Network and the Disability Rights Education and Defense Fund addresses the ways in which people with disabilities have long been denied control over their bodies and face multiple barriers to reproductive health care.

These include barriers to abortion care for reasons ranging from “lack of simple physical access to health facilities,” to laws that fail to recognize the “many physical disabilities and chronic health conditions can complicate pregnancy, in ways that render a 15-week gestational ban entirely unworkable” for some people with disabilities.

“As a result of these challenges and others, obtaining an abortion with a disability often requires substantial long-term planning that may simply be impossible if this Court allows the challenged statute to go into effect,” the amici write.

Amici conclude that, “Both because of the unique health challenges associated with pregnancies in disabled people and because of the special access challenges they face, banning abortion after 15 weeks would undermine their ability to make a meaningful decision about whether to continue or terminate a pregnancy.”  Read the brief by Disability Rights Organizations.

These briefs are among over 50 amicus briefs filed supporting this case that will be heard by the U.S. Supreme Court on December 1. For more information, go to Dobbs v. Jackson Women’s Health Organization.

Read these briefs and more:

More about the case: