A recent landmark ruling by the Indian Supreme Court was another demonstration of the global trend of countries strengthening legal protections for abortion rights.

The Court ruled that under India’s Medical Termination of Pregnancies Act, 1971 (MTP Act), and its related rules, all women are entitled to safe and legal abortion, regardless of their marital status.

While abortion remains criminalized in India, the MTP Act created exceptions to criminalization and set forth circumstances under which some abortions could be permitted—such as in cases of rape or fetal anomaly, or for women with disabilities.

The Court’s ruling, issued September 29, stated that the distinction between married and unmarried women under the MTP Act is arbitrary and all women have the autonomy to exercise their rights regarding safe and legal abortion up to 24 weeks of gestation.

“The Indian Supreme Court gave a purposive interpretation of the law considering the lived experiences of women compelled to carry a pregnancy to term against their wishes,” said Sara Malkani, legal adviser for Asia at the Center for Reproductive Rights, in an op-ed published October 23 in Dawn. “The Court concluded that the intent behind the legislation was to enable all women, regardless of marital status, to avail safe and legal abortions,” added Malkani.

The Court’s ruling cited the Center’s 2018 report, Ensuring Reproductive Rights, which highlighted the fear of criminal prosecution. Such fear often results in medical providers insisting on compliance with extra-legal conditions such as consent from the woman’s family, documentary proofs, or judicial authorization. The Court held that these extra-legal requirements have no basis in law, and it is only the pregnant woman’s consent that is relevant. 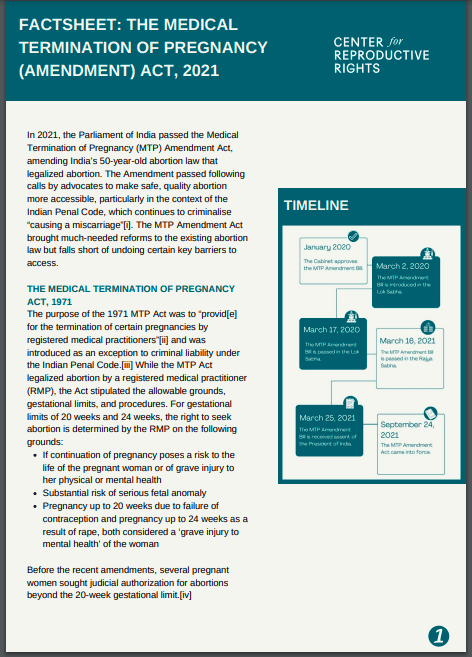 Recognizing that the mandatory reporting requirement under the child sexual abuse law (POCSO Act) creates barriers to adolescents accessing SRHR services, the Court ruled that for the purposes of the MTP Act, at the time of reporting the medical provider is not required to disclose the identity and personal details of the minor seeking an abortion, whether on her own and with her guardian’s request.

On unwanted pregnancies as a result of ‘marital rape,’ the court held that in such cases, married women  could seek abortion services until 24 weeks of pregnancy, notwithstanding the exemption to marital rape under India’s penal code.

Global Trend is Toward Liberalization of Abortion Laws

For decades, the overwhelming global trend has been towards liberalization of abortion laws and increased access to abortion services. Since 1994, nearly 60 countries across all regions of the world have liberalized their abortion laws to expand the grounds under which abortion is legal. This Center infographic shows the 59 countries that have liberalized their abortion laws, and the four that have regressed.

Only four countries—the U.S., El Salvador, Nicaragua, and Poland—have removed legal grounds for abortion during that time. The U.S. joined this group of global outliers when the U.S. Supreme Court eliminated the constitutional right to abortion earlier this year.

The Indian court’s judgement “is a ray of hope in light of the persistent attacks on women’s rights around the world,” says Malkani. “We should hope that courts and lawmakers in other countries also move towards an interpretation of fundamental rights guided by realities faced by women and a vision of meaningful equality.”

Amendment to India’s 1971 law a step forward, but gaps remain. This Center factsheet, released in September 2022, outlines and analyzes India's 2021 MTP Amendment Act, which aimed to reform the...