Argentine President Alberto Fernández signed the law on January 14 permitting abortion during the first 14 weeks of pregnancy. Previously, Argentina permitted abortion only in cases of rape or incest or to save the mother’s life.

After the Senate vote in late December approving the bill, President Fernández–who campaigned for office in part on his support of abortion rights–tweeted, “Abortion, safe, legal and free, is law.”

On December 22 the Center submitted a letter to the Argentine Senate and 12 embassies across Latin America in support of the new law.

The letter stated that Argentina’s abortion restrictions encouraged “the procedure to be practiced in unsafe conditions, increasing the rates of maternal mortality and morbidity. This constitutes a violation of the right to health…” It continued, “Reproductive rights constitute the basis of self-determination for pregnant people over their bodies and their sexual and reproductive lives, and are crucial for them to be able to attain their maximum potential as people.”

President Fernández framed the issue as a matter of public health—of “whether abortions are performed clandestinely or in the Argentine health system.” In Argentina, dozens of women die each year seeking abortions, according to Argentina’s Access to Safe Abortion Network.

The victory was the culmination of a years-long popular movement for expanded abortion rights in the country. A formal campaign began in 2005, and in recent years demonstrators waving signature green handkerchiefs to signify their support became a common a sight at rallies throughout Argentina.

In the past 25 years, there has been an overwhelming global trend toward the liberalization of abortion laws, with over 50 countries liberalizing their laws. Despite this trend, an estimated 41% of the world’s women of reproductive age still live under restrictive laws, and 27 countries ban abortion in all cases. More than 35 million women around the world have abortions in unsafe conditions each year, according to the Guttmacher Institute. The World Health Organization estimates that 68,000 people die from unsafe abortions annually, with millions more suffering complications, many of them permanent.

Argentina Decriminalizes Abortion in All Cases of Rape

This week, the Argentine Supreme Court handed down a historic decision, which clarifies that abortion is decriminalized in all cases...

(PRESS RELEASE) Today, the Center for Reproductive Rights announced the opening of its new regional office for Latin America and... 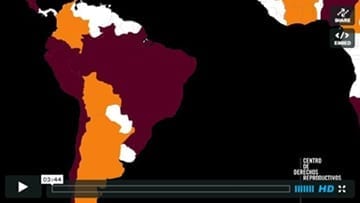