In the Courts, Engaging Policymakers, In the States (USA) What does our historic win at the Supreme Court mean for abortion access? Stephanie Toti, lead attorney in the case, breaks it down.

To keep calm on the evening before the U.S. Supreme Court was scheduled to issue a decision in the most significant abortion-related case in a quarter of a century, Center for Reproductive Rights attorney Stephanie Toti spent hours baking: pound cake, banana bread, dozens of cookies. She frosted some of the treats bright purple—the signature color of her client, Whole Woman’s Health, an imperiled abortion clinic in Texas.

The next morning, Toti and her colleagues gathered in a tense conference room at the Center’s New York offices to await the Court’s ruling. Some folks nibbled nervously on the purple baked goods Toti had brought in to work. Others couldn’t manage a single bite.

This fateful moment was a long time in the making. For the past several years, the Center had been gearing up for an epic court battle against the plague of restrictions that has threatened women’s right to safe, legal abortion in states around the country. From the instant last fall when the Supreme Court agreed to hear our case against HB2, the Texas law using sham health regulations to shut down most of the state’s clinics, it was clear this high-stakes day would come.

For 38-year-old Toti, who argued the case back in March in her first appearance before the Supreme Court, the optimism she felt about her chance at prevailing was balanced against an overwhelming urge not to assume anything without concrete evidence—a trademark characteristic of a good lawyer.

“There was an incredible amount of speculation around the case,” says Toti. “We were confident because the evidence in the case was so strong, but you never really know what the Court is going to do until it does it.”

When the news came through that the Court had ruled 5-3 in favor of the clinics, the room—and thousands of onlookers across the country—erupted with jubilation and relief. Toti was in happy shock—although she quickly retreated to a quiet office with a highlighter to comb through the Court’s decision in depth.

But even without the highlighter, the message was clear: The U.S. Supreme Court had once again affirmed that women have a constitutional right to end a pre-viability pregnancy—and that states may not impede that right without proof that the restriction will improve that experience for women seeking care.

Toti and her top-flight team had been fighting Texas restrictions targeting abortion providers since shortly after the state legislature passed HB2, a sweeping anti-choice law including two particularly harmful and medically unnecessary provisions designed to shut down clinics in the state in 2013.

The first provision required all abortion providers to obtain local hospital admitting privileges. The second provision required every clinic to meet the same hospital-like building standards as an ambulatory surgical center, which can cost millions.

The Center filed a lawsuit challenging these provisions on behalf of Whole Woman’s Health and several other Texas abortion providers in April 2014. The case made its way through federal district court and the U.S. Court of Appeals for the Fifth Circuit. Twice during the litigation, the Supreme Court had to step in to grant emergency stays to keep some of the threatened clinics open while the case continued.

Nevertheless, as a result of partial implementation of HB2, the number of clinics in Texas shrunk from 42 to 19, putting countless women out of reach of the nearest provider. The clinic closures increased wait times and pushed some women to take matters into their own hands—creating a growing public health crisis.

Last fall, the Center asked the Supreme Court to review the Texas clinic shutdown law, and the on November 13, 2015, the Court agreed.

By rejecting the provisions of the law that would close down all but nine of the state’s clinics, the Court restored access to safe, legal abortion care for millions of women across Texas and soundly rejected the constitutionality of such restrictions. The impact of the ruling will extend beyond Texas to other states around the country where similar laws have been passed.

In a concurring opinion—which Toti refers to as “the exclamation point at the end of the sentence”—Justice Ruth Bader Ginsburg emphasized that abortion is safer than many medical procedures that are not subject to such restrictions —including childbirth, tonsillectomy, and colonoscopy. She also noted, “It is beyond rational belief that HB2 could genuinely protect the health of women,” and the law “would simply make it more difficult for them to obtain abortions.”

For Toti and her team, it is an unmitigated win.

“Upholding the Texas law would have gutted much of the power of Roe v. Wade and set the struggle for women’s equality back by decades,” says Toti. “Instead, in the wake of the Court’s decision, women’s reproductive rights have never been stronger in this country.”

Repairing the damage wrought by HB2 will not happen overnight. Although the shuttered Texas clinics are now legally eligible to re-open, many—having been closed for more than two years—would first have to re-hire staff, secure new office space and equipment, and ultimately obtain a new license from the state.

In the meantime, however, the 19 clinics currently operating in Texas can reinstate the doctors that were forced to stop providing abortion services due to the admitting privileges requirement. This will help to alleviate backlogs and reduce wait times for women who are able to reach an open clinic.

From a legal standpoint, the Court’s decision in Whole Woman’s Health is already reverberating beyond Texas borders—although its full impact remains to be seen.

“There is no question that this case is a game changer for reproductive rights,” says Toti. “The evidence-based standard articulated in the decision will be incredibly helpful in blocking future legislation that imposes unjustified restrictions on abortion access.”

Within a day of the ruling, the Court upheld lower court decisions that had blocked similar laws in Mississippi and Wisconsin, and Alabama announced it would no longer defend its admitting-privileges requirement.

Prior to Monday’s ruling, 10 states around the country had admitting privilege requirements on the books. Six states had enacted ambulatory surgical center requirements. Now that these sham provisions have been deemed unconstitutional in Texas, it appears inevitable that the rest will now—in Toti’s words—“fall like dominoes.” 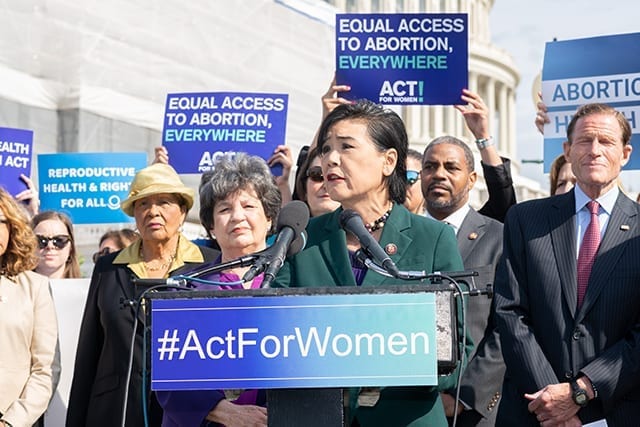 The Center concludes the SCOTUS nominee “stands all too ready, if not eager, to undermine women’s basic liberty rights.” The...