In 2022, lawmakers in states hostile to reproductive rights intensified their efforts to attack legal protections for abortion, failing to pass laws to safeguard maternal health and declining to expand access to fertility care. In contrast, lawmakers in states supportive of reproductive rights took steps to protect abortion rights and improve access to maternal and fertility care.

These findings come from a new report published by the Center for Reproductive Rights, the 2022 State Legislative Wrap-up. The report provides an overview of the state policy landscape after analyzing hundreds of bills proposed and enacted in U.S. state legislatures relating to reproductive care.

“The differences in lawmakers’ priorities and approaches during the year were incredible, with some states rushing to ban abortion and others strengthening efforts to defend abortion rights and access,” said Elisabeth Smith, the Center’s director, state policy & advocacy. “We hope this report provides a thorough understanding of what’s really happening in state legislatures as the fight for reproductive autonomy continues to be focused in the states.”

Below are highlights from the report.

In June, the U.S. Supreme Court eliminated the federal constitutional right to abortion, clearing the states to ban abortion entirely. During the year, multiple states rushed to enact abortion bans and restrictions that will only worsen reproductive health outcomes instead of addressing increasing maternal mortality, which disproportionately impacts Black women and birthing people.

During the year, almost 700 bills were proposed relating to abortion: 430 bills restricted or banned abortion, and 230 protected abortion rights and access. Bills were both in anticipation of, and as a result of, the Supreme Court’s ruling overturning Roe v. Wade.

Abortion on the Ballot link

Abortion on the Ballot

In 2022, Americans across the political spectrum voted to preserve or expand reproductive rights. When abortion was directly on the ballot, abortion rights supporters won every contest.

Numerous states acted to protect abortion rights and access, with bills focused on protecting abortion providers and individuals seeking care outside of their home states.

Get real-time analysis of abortion laws and policies in all U.S. states with this interactive tool.

Some state legislatures sought to amend their state constitutions to expand reproductive freedom or limit abortion access by referring initiatives to ballot votes.

Despite declines in maternal mortality globally, people in the U.S. continue to experience high rates of maternal mortality and severe maternal morbidity. While during the year lawmakers introduced more than 800 bills related to maternal health care and enacted 145 in 35 states and the District of Columbia, legislative accomplishments to protect pregnant people were modest. The Center works in U.S. states to implement reproductive rights policy initiatives and strategies that improve access to abortion care and prevent restrictions.

Infertility impacts millions of people in the U.S., yet numerous barriers—such as limited information, restrictive laws and policies, stigma, high costs, and more—put fertility care, including in vitro fertilization (IVF), out of reach for many.

The trends of 2022 are likely to continue in 2023, according to the 2022 State Legislative Wrap-up. “Some states will introduce creative bills to restrict abortion, including via novel criminal penalties, and others will seek to protect access to abortion,” says the report. More pregnant people are expected to be denied access to care and forced to travel across multiple state lines and, for those without means to travel, to continue pregnancies against their will. WHPA is federal legislation that creates a new legal protection for the right to provide and access abortion care.

“This report confirms what we already knew: that the states most aggressively banning or restricting abortion are unlikely to pass laws that promote or safeguard maternal health,” said Smith. “The divide between states with strong reproductive health policies and states where maternal health is neglected will only continue to grow unless lawmakers take consequential action.”

The Center continues to litigate against state abortion bans and to advocate for federal legislation to protect abortion rights and access nationwide. The Women’s Health Protection Act (WHPA) would create a statutory right for health care providers to provide, and a corresponding right for their patients to receive, abortion care—free from restrictions and bans.

The Center for Reproductive Rights 2020 Legislative Wrap-up provides a report of U.S. state abortion laws enacted during the year.... Center Report: More State Abortion Restrictions Passed in 2021 Than in Any Year Since Roe v. Wade

In 2021, states across the U.S. passed laws restricting and banning abortion at a rate higher than in any previous... 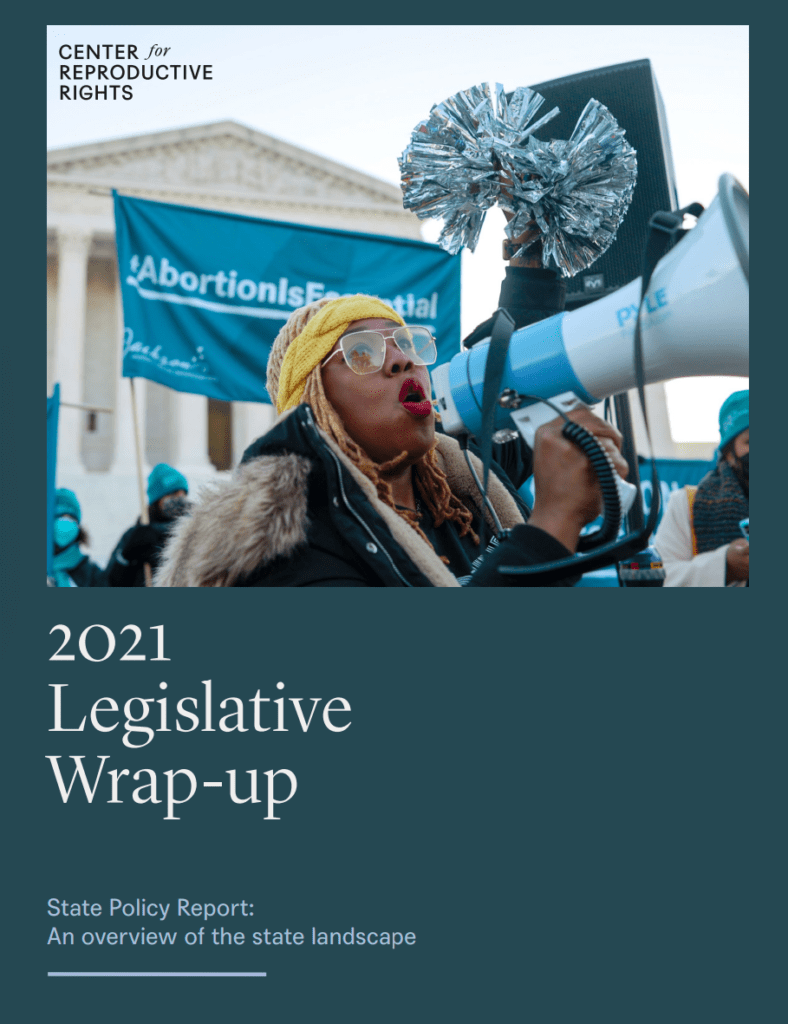 State Policy Report: An overview of the state landscape