970 million women, representing 59% of women of reproductive age, live in countries that broadly allow abortion. While a majority of women live in countries where they can exercise their right to abortion, 41 percent of women live under restrictive laws. The inability of to access safe and legal abortion care impacts 700 million women of reproductive age. According to the World Health Organization, 23,000 women die of unsafe abortion each year and tens of thousands more experience significant health complications. Legal restrictions on abortion do not result in fewer abortions, instead they compel women to risk their lives and health by seeking out unsafe abortion care. The laws of the countries in this category do not permit abortion under any circumstances, including when the woman’s life or health is at risk. 26 countries globally fall within this category. 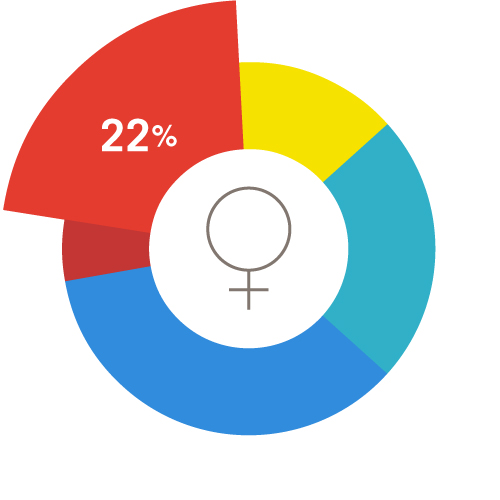 359 million (22%) women of reproductive age live in countries that allow abortion to save the life of the woman. The laws of countries in this category permit abortion on the basis of health or therapeutic grounds.

237 million (14%) of women of reproductive age live in countries that allow abortion on health grounds. These laws are generally interpreted liberally to permit abortion under a broad range of circumstances. These countries often consider a woman’s actual or reasonably foreseeable environment and her social or economic circumstances in considering the potential impact of pregnancy and childbearing.

386 million (23%) of women of reproductive age live in countries that allow abortion on broad social or economic grounds. 590 million (36%) women of reproductive age live in countries that allow abortion on request. 67 countries globally fall within this category.